At My Own Pace: The Autobiography of Fred S. Keller 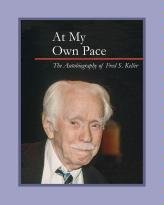 Categories: All, Books Tags: All, Philosophy/History

At My Own Pace: The Autobiography of Fred S. Keller
Edited by Jon S. Bailey, Mary R. Burch, A. Charles Catania, and Jack Michael
At My Own Pace, the compelling, delightful, but also educational autobiography of Fred S. Keller, is a vital book for anyone interested in behavioral science. Keller’s versatile body of work included devising methods for Morse Code operators during World War II, teaching the first undergraduate course in psychology using Skinner’s experimental methods, developing the Personalized System of Instruction (PSI), delivering behavior analysis to Brazil and other countries, and writing several important psychology texts. He describes the evolution of these contributions and illuminates the roles of B.F. Skinner, Nat Schoenfeld, and many others with whom he interacted. At My Own Pace is a must-have book for every behavior analyst.